An inspirational journey through places  full of light and faith.  Whether you're moved by faith or  spiritual sense; whether looking for temples and devotion or multicultural places. All of them united by the word Peace. All of them full of Light. 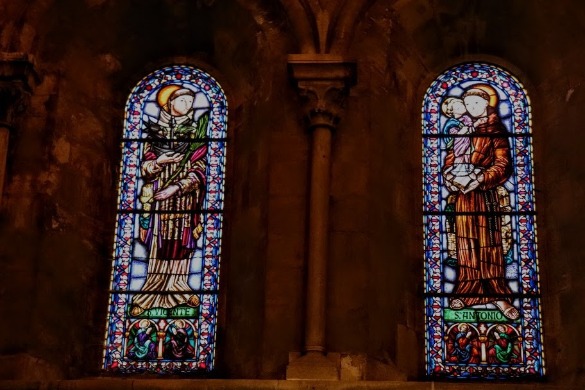 Our overnight multi-day tour inspired in Religious Heritage begins with a visit to Saint Anthony's Church - built on the ruins of the birthplace of Fernando de Bulhões.

This man of faith was born between 1191 and 1195. He's still esteemed by the portuguese and people all over the world. You know him as Saint Anthony of Pádua - religious and knowledgeable; a preacher of excellence.

In this Church you can also visit the Crypt where you can see a relic of the Saint - authenticated by Bula.

Right next to the magnificent Old Cathedral you have the most scenic views over the city. The oldest and medieval part of the city extends its self to the Tagus River and to the reinvented city, after the big earthquake, in 1755.

Heading north, towards Fátima, one hour from Lisbon, our next stop is the city of Santarém.

The Portas do Sol viewpoint over the waters of the Tagus River has inspired famous portuguese writers in the past. And, long before that, it served as an observation, military, as Portugal was building its territory from north to south - 12th century.

We’re also going to visit the Church of the Holy Miracle. This church is home to a 13th century Eucharistic miracle. It is also one of the most famous shrines among  its kind. It is visited by thousands of pilgrims every year coming from all over the world.

Less than a hour of driving we arrive at Fátima where is one of the most cherished Marian Shrines in the world.

At the Sanctuary we’ll visit the Chapel of the Apparitions – where our Lady appeared for five times and talked to the little shepherds. Also the large holm-oak where they used to pray the Rosary; the Colonnade with its 200 columns and religious statues and the the Basilica of Our Lady of the Rosary of Fatima – where we have the remains of Blessed Jacinta and Francisco and also Lúcia.

Crossing the shrine you can stop next to the statue of Sacred Heart of Jesus and the Nativity  Scene.

Our next visit is the Basilica of the Most Holy Trinity with its high bronze doors, dedicated to the Twelve Apostles and the main portico alluding to the apparitions of the Angel.

The visit will end with a place of historic memory: the Monument of the Berlin Wall. This place reminds us of the importance of John Paul II in bringing the eastern and western parts of Europe closer together and the message of Fatima. 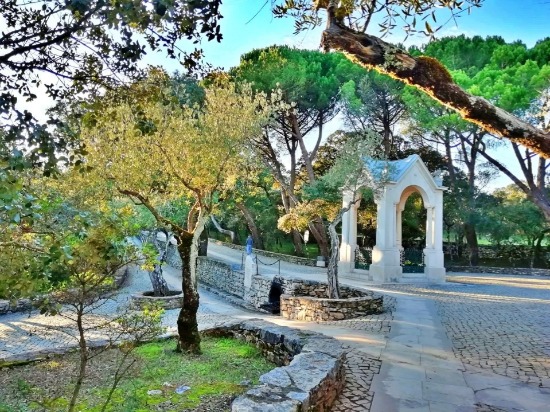 Today, we invite you to visit Jacinta, Francisco and Lucia’s houses in Aljustrel. Here you can imagine how their daily lives were like in the early 20th century in our country.

We’re also going to visit the Well of Arneiro, on the backyard of Lucia's house – the place of the second apparition of the Angel.

Finally in Valinhos we will visit Loca do Anjo - where, the first and the third apparition of the Angel, took place – and the place where the fourth apparition of Our Lady, occurred.

Here, you will be able to enjoy, not only a magnificent landscape of the whole scenery surrounding the "Miracle of Fátima": Aljustrel, Valinhos, Parish Church of Fátima and Fátima Sanctuary but mainly the silence and peace of the Path of the Three Shepherds.

In the afternoon we'll visit Coimbra.

In 1925 Lúcia entered the Institute of the Sisters of St. Dorothy as a postulante in the convent in Tui, Spain - across the portuguese border. In 1948 she entered the Carmelite convent in Coimbra - Portugal - and took her vows. Her religious name: Sister Maria Lúcia of Jesus and the Immaculate Heart. She lived in Saint Teresa Convent until her death in 2005.

Here we’re going to visit a small museum with a replica of her cell; her first rosary and other personal objects; handwriting letters, pictures, multimédia explanation and others.

But visiting Coimbra also means to visit the City of Knowledge as Coimbra is also known since the Middle Ages. Bathed by the Mondego River, it is famous for its University and Joanine Library; students in their black cloaks and serenades; the Monastery of Santa Cruz de Coimbra - where the first King of Portugal, Afonso Henriques, rests; the New Cathedral; the Old Cathedral and the historic center. 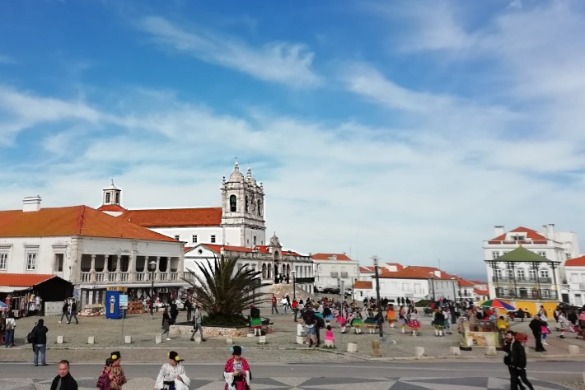 In the afternoon we will go to the beautiful fishing village of Nazaré.

What can we say about this fishermen village?

Legends and pilgrimages since Middle Ages; adventure with big waves and world surf records; a dazzling  view over the blue sea.

The view from the top of the cliff "Sítio da Nazaré" over the Atlantic Ocean is breathtaking. But it's also in this hilltop that we'll find the Sanctuary of Our Lady of Nazaré - from 17th century - where we have a painted wooden black Virgin statue - and the Ermida da Memória [a Memorial Chapel] built in 14th century where - according to a local legend this statue was found underneath and venerated by pilgrims, since then, through times. It's it believed that this statue was brought here from Mérida, in Spain, in 8th century. 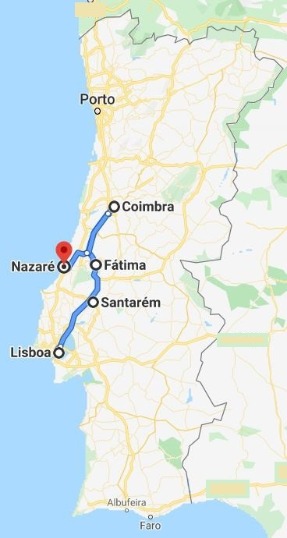